One such process is sublimation. The definition of sublimation states that the thermodynamic process of converting a solid to a gas directly without a liquid intermediate being formed is called so. We do not observe sublimation in most substances, and it is an exception out of the usual processes of inter conversion of the states of matter.

When we keep naphthalene balls between clothes to preserve them, and they evaporate without leaving any liquid residue, it is an example of sublimation. 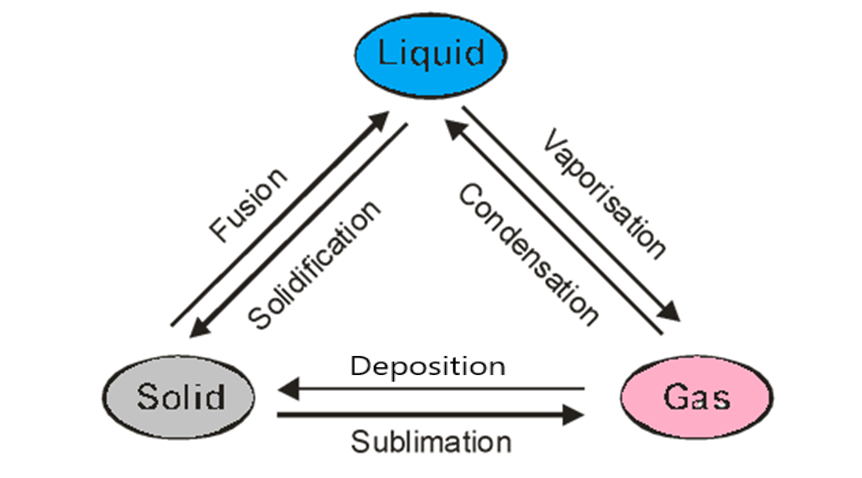 Sublimation is the transition of a substance directly from the solid to the gas state without passing through the liquid state. The process of sublimation is a thermodynamically endothermic process that occurs at temperatures and pressures below the lowest pressure at which the substance can exist as a liquid, referred to as its triple point. This means that it absorbs heat to complete the process. The reverse process of sublimation is deposition or de-sublimation, in which a substance passes directly from a gas to a solid phase. Sublimation is also used as a generic term to describe a solid-to-gas transition (sublimation) followed by a gas-to-solid transition (deposition).

In simple words, sublimation is the process during which a solid is heated and gets converted to gas directly without producing the liquid intermediate. As mentioned in the earlier paragraphs, during sublimation, the molecules absorb energy from the heat supplied to raise the temperature. Henceforth causing the kinetic energy to increase for the individual molecules and make them rush farther from each other. This, in turn, will increase the volume sufficiently and convert the compact solid into a fluid gas.

What Is Endothermic Or Exothermic Process?

Thermodynamic processes are the ones that usually involve a change or flow in heat between substances. These processes are classified into two types. They are as follows;

There are intermediate processes too. The image below shows the differences between an endothermic and exothermic process.

Is Sublimation Endothermic Or Exothermic?

Sublimation is an endothermic process since it requires some form of energy to convert the solid into a gas component. Heat energy is usually supplied to bring about the physical change from a solid to gas during the process of sublimation. In other words, sublimation occurs due to the absorption of heat. This provides sufficient energy for the solid molecules to break the intermolecular attraction of their particles. Henceforth transitioning into the vapor phase.

In simpler words, to increase the kinetic energy of the constituent molecules to cause sublimation, we supply the energy from outside to raise the energy of the molecules and make them rush apart, increasing the volume. Henceforth, this would lead to the conversion of the state, and this will convert the solid to a gas.

The absorption of heat provides enough energy for some molecules to overcome the attractive forces of their neighbors and escape into the vapor phase, resulting in sublimation. It’s an endothermic change because it necessitates more energy.

In other words, sublimation occurs as a result of heat absorption, which provides enough energy for the solid molecules to break the intermolecular attraction of their particles and transition into the vapor phase. Thus, it is an endothermic process.

The following are the examples of sublimation;

Next Post What are Centrioles, and Are They Present in Plant Cells?