You may use the cups to ounces converter above to convert cups to ounces (oz). You can also use the cups to the ounces table to figure out how many ounces are in “Y” cups. Below you’ll find instructions on how to calculate the number of ounces in “Y” cups, with formulas and examples of conversions. The conversion table and converter are based on US cups and fluid ounces. 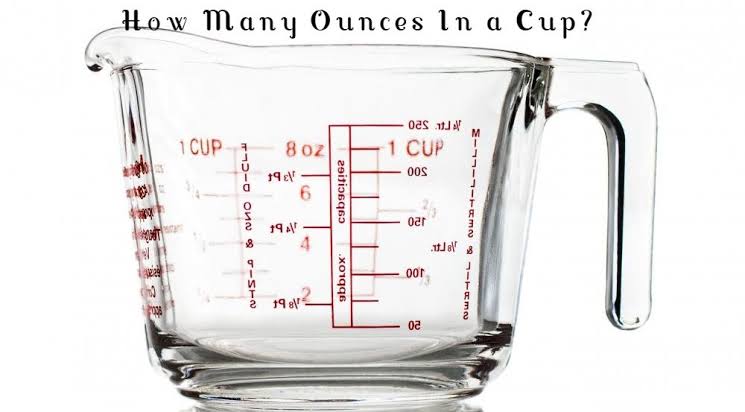 A cup is a volume measuring unit used in cooking to measure bulk items such as chopped vegetables (a dry measurement example) or liquids such as milk (fluid measurement). It is widely used in many countries, particularly those that were once part of the British Empire, such as the United States and most Commonwealth of Nations members, as well as those that aspired to be like them, such as Japan.

A cup is a volume measurement that equals 16 tablespoons or 8 fluid ounces. The cup is not to be confused with the metric cup or the teacup, which are both separate volume units. Although one cup is almost about 236.6 millilitres, it is labelled as 240 millilitres on nutrition labels.

The cup is a standard volume measurement in the United States. Cups are commonly shortened as C and can alternatively be abbreviated as c. 1 cup, for instance, can be written as 1 c or 1 C.

A fluid ounce is a volume unit that is used in both the Imperial and US customary units systems. The two metrics, however, are not identical: The imperial fluid ounce is around 1.734 cubic inches or 28.4130625 millilitres, or 1/160 of an imperial gallon, 1/20 of an imperial pint, or 8 fluid drams. This volume of water weighs about 1 avoirdupois ounce (the volume occupied by one ounce at 62 degrees Fahrenheit (16.7 degrees Celsius), weighed in the air using brass weights).

The ounce refers to a number of various mass, weight, and volume quantities, and it is derived practically intact from the uncia, an Ancient Roman unit of measurement.

Although the avoirdupois ounce is the most widely used unit of measurement, precious metals such as gold, silver and others are measured in troy ounces, which weigh exactly 31.1034768 g.

‘Ounce’ is also a term used in other purposes:

The ounce force is a unit of force measurement (see below).

The fluid ounce is a volume measurement.

Historically, several ounces measuring mass or volume were used in various countries by various trades and at various eras in history.

converting cups to ounces (US recipes)

Recipes from other countries

Conversions between cups and fluid ounces are shown in the tables below (fl oz). If you’re looking for weight conversions in dry ounces, a chart and information can be found further down the page.

It’s vital to remember that a cup is a unit of volume, whereas a dry ounce (oz) is a unit of weight when converting between cups and dry ounces (oz). This means that converting a material requires an additional element – the density of the substance. Because olive oil is a denser substance, a cup full of sugar will weigh less than a cup full of olive oil, as an example.

I’ve provided a list of options for you to choose from. Please keep in mind that these are only estimates; different brands of ingredients will vary somewhat. As a result, the outcomes you receive will be estimates. The ingredient densities were obtained from the United Nations’ Food and Agricultural Organization, as well as other sources.

A cup contains 8 ounces. Multiply the cup value by 8 to convert cups to ounces.

For example, to calculate the number of ounces in a half-cup, multiply 8 by 0.5, which equals 4 ounces.

How to convert ounces to cups?

What is a Cup?

What is a Fluid Ounce?

A fluid ounce is a volume unit used in the imperial and US Customary measuring systems. 0.125 US cup Equals 1 US fluid oz. “fl oz” is the sign.

How many ounces in a cup?

How to convert cups to fluid ounces?

Is there a difference between US and UK fluid ounces?

How do I measure a fluid ounce in cups?

Is a measuring cup 8 ounces?

Is a fluid ounce bigger than a cup?

Why is the US gallon different to the UK gallon?

A gallon is equal to 128 fluid ounces or 3.785 litres in the Americas (American spelling). However, in the United Kingdom, it is 160 fluid ounces (4.546 litres) (British spelling). That’s a significant difference, since the British competitors may need to consume 20% more milk than their American colleagues.