A discriminant is a function of a polynomial equation’s coefficients that expresses the nature of the roots of a particular quadratic equation. However, the equations may distinguish between many sorts of answers, such as:

However, the discriminant value aids in decoding.

The following is how to use the discriminant calculator: 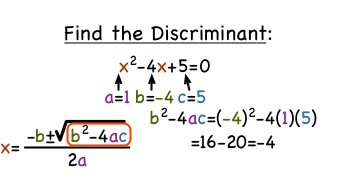 Discriminant equals b squared minus 4ac. We will know that there are three cases that are possible for the discriminant.

So, in the first case, we have a positive discriminant. It is greater than zero.

Then, in the second case, we have exactly zero for our discriminant.

Then, in the third case, we have a negative discriminant.

So, the first case, if we have a positive because we have something to add and subtract. Then, we are gonna have two roots, remember adding, subtracting and coming from the axis of symmetry. They give us two different x-intercepts.

So, the second case is the very specific case where you only get one real root. Because your root vertex is right on the x axis. It is the x intercept.

So, the last case is when you try to square root a negative, you get zero real roots. It means you actually don’t have any x intercepts.

We are gonna make use of these three cases to solve three different questions. 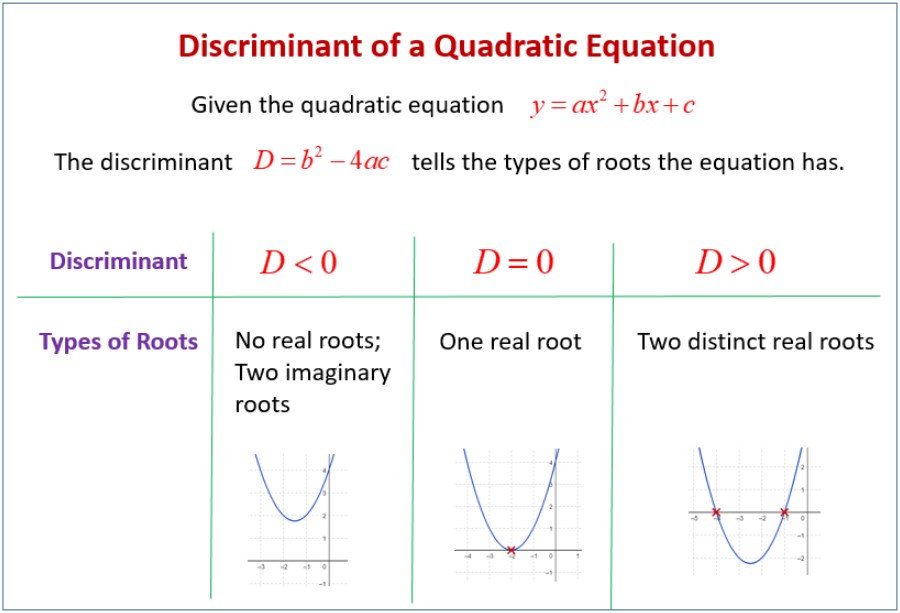 We will say a is 1, b is K and I changed the c value to positive 9. Once we plug our values in, we square root for K. We get plus or minus 6. Actually we are doing a perfect square trinomial. It means if we were to graph it, our vertex in each of those cases would either be positive 3 or negative 3. It means we had been right on the x axis. So, the vertex is the x intercept. In the particular case, where we have one real root.

b square minus 4ac greater than 0

b square minus 4ac less than zero

Discriminant Calculator with step by steps

As a result, the first step is to write our quadratic equation in standard form, which is ax^2 + bx + c = 0.

So we rearrange this equation to give it the conventional form ax^2 + bx + c = 0. Hence,

The quadratic equation has now been transformed into standard form.

This is the most significant stage, in which the values of coefficients a, b, and c are determined by comparing them to the Standard Form of Quadratic Equation ax^2 + bx + c = 0.

Enter the values of a, b, and c into the discriminant calculator formula b^2 – 4ac.

Because D > 0, the equation has two unique and actual roots.

A polynomial’s discriminant is a function of its coefficients in algebra. It describes the characteristics of its roots. Discriminant is frequently abbreviated as ‘D.’ The cubic root or third root is the number that multiplies by itself three times to get a cubic value.

The determinant assists us in determining the inverse of a matrix and provides information about the matrix that is important in systems of linear equations, mathematics, and other areas.

First and foremost, the matrix must be square (i.e. have the same number of rows as columns). Then it’s simply arithmetic.

For a 3 into 3 matrix (three rows and three columns),  The determinant is as follows:

“The determinant of A equals… and so on.”

Although everything appears to be difficult, there is a pattern.  To find the determinant of a into 3 into 3 matrix, use the following formula:

Multiply a by the determinant of the 2 into 2 matrix that does not belong to a’s row or column.

Similarly, for b and c.

Add them all up, but keep the negative sign in front of the b in mind.

As a formula (note that the vertical bars || stand for “determinant of”):

The pattern is repeated for 4 into 4 matrices:

A quadratic equation’s discriminant is defined in terms of its coefficients a, b, and c. i.e.

In terms of the discriminant, the quadratic formula is: x = minus b plus minus root D by 2a.

The quadratic discriminant formula is as follows:

The discriminant is equal to 196. 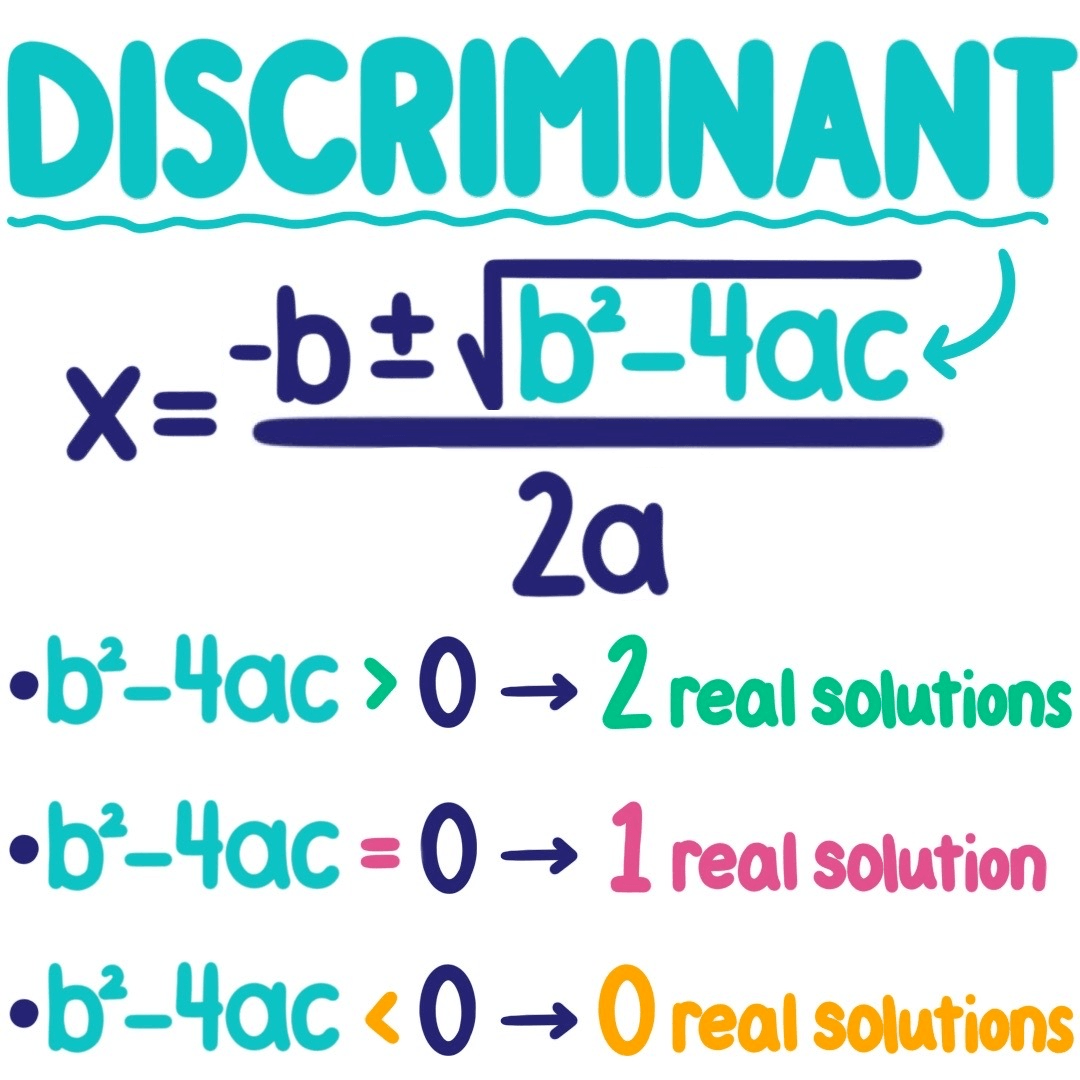 As a result, we have a positive discriminant, and the provided equation has two real roots.

As a result, we have a negative discriminant, and the provided equation has no real roots.

36a4 is the discriminant of the above quadratic equation.

We may derive some fundamental aspects of discriminants from the arithmetic formula for discriminants presented in the preceding sections.

Assume that D(p) is the discriminant of p, as described above. In terms of D(p) values:

D(p) is always a real number since p is a real polynomial.

Then, D(p) is greater than zero if and only if the number of non-real roots of p is a multiple of four (zero included).

Under homothety, D(p) is invariant (up to scaling):

Take a look at the quartic polynomial ax⁴ + bx³ + cx² + dx + e. The formula for its discriminant is as follows:

D is greater than zero if and only if there are four unique real roots or four separate non-real roots (two pairs of conjugate complex roots).

Then, D 0 if and only if there are two separate real roots and two unique non-real roots (including one pair of conjugate complex roots); and

D = 0 if and only if two or more equal roots exist. There are six options:

However, the values of x that fulfil the quadratic equation ax2 + bx + c = 0 are known as the roots. Then, the quadratic formula may be used to find them: x = minus b plus minus root D by 2a. Though we cannot locate the roots just by utilising the discriminant, we may determine the nature of the roots by doing the following.

If D is greater than zero, the quadratic equation has two distinct real roots. Then, this is due to the fact that when D > 0, the roots are provided by x = minus b plus minus root positive number by 2a. Because taking the square root of a positive number always yields a real number. When the discriminant of a quadratic equation is larger than 0, it has two separate and real-number roots.

If D is zero, the quadratic equation has two complex roots. However, this is due to the fact that when D = 0, the roots are provided by x = minus b plus minus root negative number by 2a.

Hence the square root of a negative number always results in an imaginary number. For example, root minus 4 equals 2i. So, when the discriminant of a quadratic equation is smaller than zero, it has two different and complicated roots (non-real).

and a 0’s square root is 0. The equation then becomes x = -b/2a, which is only one integer. When a quadratic equation’s discriminant is zero, it has just one real root.

How do I calculate the discriminant?

What is discriminant Grade 9 math?

The discriminant formula is used to determine how many solutions a quadratic problem has. The discriminant is the term given to the equation that appears in the quadratic formula under the square root (radical) sign in algebra.

What is Discriminant Meaning?

A discriminant is a function of a polynomial equation’s coefficients that expresses the nature of the roots of a particular quadratic equation. The equations may distinguish between many sorts of answers, such as:

What is the Discriminant Formula?

There are several discriminant formulae for various polynomials:

What is BX in a quadratic equation?

The quadratic function is f(x) = a * x2 + b * x + c, which informs you how the function would look when graphed. The b-value is the middle number, which is the number adjacent to and multiplied by the x; changing the value of b influences the parabola and the subsequent graph.

How do you find the B value of a sine graph?

What is the example of a Discriminant?

36a^4 is the discriminant of the above quadratic equation.

How do you do quadratics?

To Use factoring to solve a quadratic problem,

How are equations made?

An equation consists of two expressions joined by an equals symbol (“=”). The expressions on the two sides of the equals sign are referred to as the equation’s “left-hand side” and “right-hand side.” The right-hand side of an equation is frequently considered to be zero.

Previous Post Difference quotient — all you need to know