Of course, we all know that the computer does not understand our language at all. In fact, it only understands the language of 0’s and 1’s.

We call this the binary language. 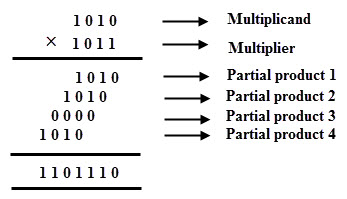 In fact, you can represent almost everything via 0’s and 1’s. So, in this article we shall discuss the binary Multiplication process in detail.

So, this is what such binary multiplication looks like.

Of course, binary numbers are simply numbers made of 0’s and 1’s. So, finding their product is actually very easy. However, you need to have a little practice for it. Otherwise, you might end up making too many menial mistakes as well.

Here, we will show you a few basic examples of binary multiplication.

For example, you might want to find the product of:

So, in order to get this result, we have to follow the table closely.

We know that the rules for binary multiplication are:

Now, let us use these rules to multiply the binary numbers. 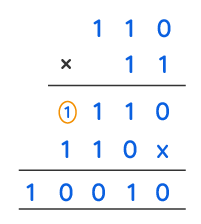 Now, we shall move on to the next example.

So, you just need to follow the rules in the table above to obtain the desired result. Actually, it is pretty simple. 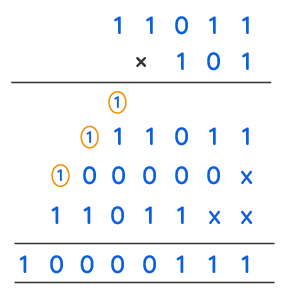 So, for the next example let us consider a binary number with decimal points. Even here, the process is quite the same actually.

So, use the similar rules in the table to derive this result. 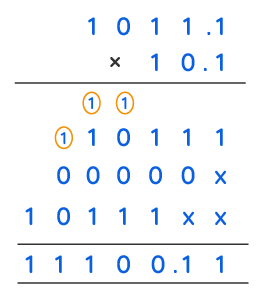 Doing the binary multiplication is pretty easy. However, you can use a calculator if you find any problem in doing it.

Binary multiplication calculator is an easy and free internet utility.

It has unique benefits:

The binary system is in use in almost all recent technology and computers. Mainly, it is due to its ease of application in digital circuits with logic gates. Or, in hardware that just has to discern two states, on and off (or true/false, present/absent, etc.) is far easier to design. Using a decimal system would need electronics able to detect ten states for all the digits from 0 to 9, as well as being harder.

So, you might want to use the binary multiplication calculator very often. We will discuss the steps to use this calculator in detail in the next part of the article.

In order to perform binary multiplications, you also need to know the way to convert decimal numbers to binary as well.

The steps to make that conversion are:

Firstly, in the first box enter the multiplicand.

Secondly, enter the multiplicator in the second box.

Thirdly, choose the operator from the drop down in the middle. Choose the addition, subtraction, multiplication or division operator according to your need.

So, that should give you your result.

Here, we shall link the calculator for you to use. However, you can use any other version of it as they are very easily found online.

In signed two’s complement representation, Booth’s algorithm shows adjacent pairs of bits of the ‘N’-bit multiplier Y. Also, it includes an inferred bit below the least significant bit, y1 = 0. The bits yi and yi1 are considered for each bit yi, for I ranging from 0 to N 1. However, the product accumulator P remains intact when these two bits are equivalent. The multiplicand times 2i is added to P where yi = 0 and yi1 = 1. And, the multiplicand times 2i is deleted from P where yi = 1 and yi1 = 0. The signed product is the final value of P.

The multiplicand and product have no unique format. In fact, they are both represented in two’s complement. However, any number system that allows basic arithmetic will work. The timing of the stages is not defined, as mentioned here.

Starting at I = 0, it normally moves from LSB to MSB; the multiplication by 2i is then superseded by gradual shift of the P accumulator to the right between stages. Thus, low bits can be moved out, and further additions and subtractions can be done only on the highest N bits of P.

In the multiplier, the method is generally stated as turning strings of 1s to a high-order +1 and a low-order 1 at the edges of the string. Also, when a string passes through the MSB, there is no high-order +1. Hence, the total effect is that the value is read as negative.

The operations of binary division and multiplication are both quite simple. You don’t have to deal with many numbers. In fact, all you have to do is make sure the 1 or 0 is in the right place. So, you have to make sure you are also good at binary adding and subtracting.

To solve a binary multiplication problem, we must first know how binary numbers work. Then, follow the same multiplication and addition steps as we would with decimal numbers.

In fact, to divide binary numbers, we must follow the same steps as we would to divide basic numbers. But, we just need to decide whether the output will be a 1 or a 0.

To divide two numbers and get an exact division, we need to do four things: division, multiplication, subtraction, and the next digit.

Here is the basic binary multiplication table. Of course, it only includes 0 and 1.  Because, those are the only digits you have to multiply in binary. Also, you need to be able to multiply each of 10 distinct digits, 0 – 9 by each of 10 different digits.

Of course, the binary number system is simple to link to the logical operators. Also, these binary numbers are used in circuits, almost all current computers use it for communication.

The table is the same as we have written above:

What is Binary multiplication with example

One of the four binary mathematical operations is multiplication. Addition, subtraction, and division are the other 3 main actions. However, we only deal with two digits in a binary operation, namely 0 and 1. In fact the method used to find the binary product is the same as that used in classic multiplication. Of course, in finding the binary digit product, there are four major steps:

Only 1 is the binary product of two binary digits 1 and 1. In this process, no extra numbers are taken or sent forward. 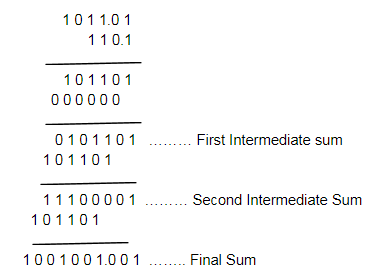 A matrix is simply a rectangular array or list of numbers in general. Similarly, we can understand that a binary matrix is an array of 0s and 1s.

Also, we have to focus on the multiplication of particular “compatible” matrices. And, the addition of matrices of equal size is also important.

However, the multiplication might be a difficult task. To begin, we’ll define row-by-column multiplication: The row and column must each have the same number of data to do this.

The row and column must each have the same number of data to do this.  The result of multiplying the relevant elements of the row and column (mod 2) and summing the outputs is the single data point (mod 2).

If a product’s first matrix has more than one row, we multiply each row of the first matrix by the column, then utilize the results to create a new column.

1.   What are the basic rules for binary multiplication?

Ans: In fact, we have read the basic rules quite a few times in this article. However, we shall repeat it again.

It is as follows:

So, this is how the table looks.

2.   What is binary multiplication?

3.   Why is binary multiplication considered as the process of repetitive addition?

4.   What happens when you multiply a binary number by 2?

5.   What is the function of the binary multiplier?

Ans: In digital systems, a binary multiplier is a logic circuit that does the multiplication of two binary digits. In fact, these are used to carry out many algorithms in a range of applications, mainly in the field of digital systems.

6.   Which of the following are binary operations?

Ans: Actually, there are four main binary operations. So, these are:

Ans: Actually, one must read binary from right to left. Also, the digit at the right end is 0.

8.   What problems does binary left shift cause?

Ans: The impact of a binary left shift is that we lose the extreme left bit. So, the remaining pieces all move one place to the left. Thus, a  0 will occupy the right-hand vacant space.

Next Post Difference quotient — all you need to know